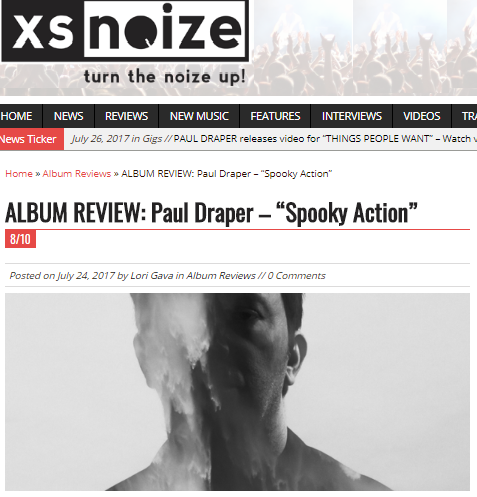 The debut solo album by former Mansun frontman, Paul Draper,  has received another great review, this time from webzine ‘xs noize‘, who have given it 8 out of 10  saying

“The release of ‘Spooky Action’ displays an artist who during his wanderings in the musical desert has become a Renaissance man skilled as a musician, singer, songwriter and musical producer. On the album he delivers a nuanced blending of experimentalism and radio friendly stylings. He seems unafraid to weave together numerous stylistic approaches, knowing when to step on the accelerator and when to slack off.”

After discussing each of the tracks individually the reviewer concludes

“On ‘Spooky Action’ Paul Draper utilizes a kaleidoscope of stylistic approaches to gain perspective and convey his emotions. It is a brilliant recording displaying all of Draper’s creative abilities that have been dammed up for over a decade and now finally set free. Fans of Mansun will be well pleased with the recording and if the fickle fates are kind ‘Spooky Action’ will draw many new admirers. Draper has never lost the musical skills he evinced with Mansun and has only matured and gained more musical mastery over the time he was in the wilderness. All that mastery is on display on this inspired and noteworthy release. Mansun has ended but hopefully a new and even better chapter starts for Paul Draper with ‘Spooky Action’.”

You can read the full extensive review HERE .