XSNOIZE have reported on the acoustic session that former Mansun frontman, Paul Draper, performed at Rough Trade East, to celebrate the 21st Anniversary reissue of ‘Attack Of The Grey Lantern’, saying:

“Paul announced he would begin with The Chad Who Loved Me. An appropriate choice, after all, Attack of the Grey Lantern opens with this haunting, charming anthemic classic, the “antithesis to what fans had previously heard or expected from Mansun and other artists categorised in the Britpop genre”. One wondered how Paul would captivate the complex cacophony of the production of this track with the absence of the strings. The strings were missing, but the soul of this track wasn’t. Paul vocals were powerful, ethereal and still peaking twenty-one years later. His passion and enthusiasm for this song as well as his debut LP had not waned.

As well as The Chad who loved Me, Paul also wowed with Disgusting and played out with Wide Open Space. The soul, warmth, perplexity, elated ecstasy and bittersweetness of these Mansun greats and classics shone through. Joyful, loud, out of key singing from the bowled over audience confirmed that Attack of the Grey Lantern has stood the test of time and can still reach out and enlighten. Alongside Attack of the Grey Lantern classics, Paul played material off his debut album, Spooky Action, as well as B-side, The Silence Is Deafening, from his debut solo EP. Spooky Action, not even in its first year, has won the hearts, souls and minds of Mansunites; they were singing along to and celebrating the new material Draper played. Friends Make the Worst Enemies and Things People Want to give fans the festival high they found when they first listened to Attack of the Grey Lantern.

Paul Drapers Rough Trade East gig did more than promote and celebrate the reissue of what can fairly be called a “classic” album; it also celebrated Paul Draper as a superb singer-songwriter, who despite not having performed for fifteen years, was able to come back and show with his Spooky Action LP, that the best is yet to come.”

You can read the whole XSNOIZE review HERE .

‘Attack Of The Grey Lantern’ is available now to buy or stream.  Visit http://found.ee/AOTGL_21ST_ANNIVERSARY 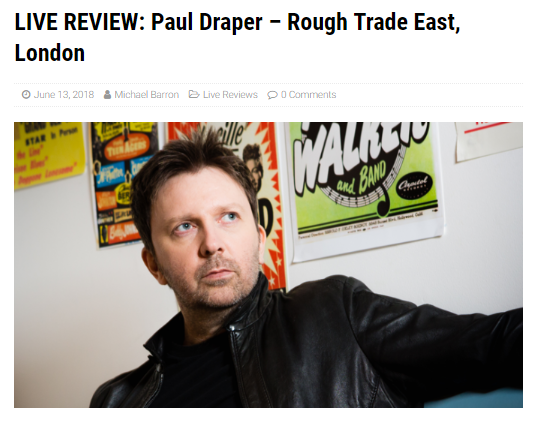