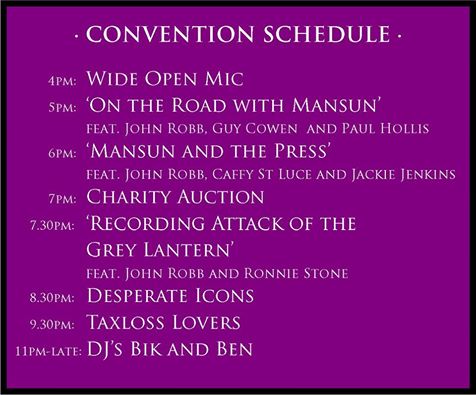 The schedule has been announced for the SOLD OUT Mansun Convention on the 18th February 2017.  The Convention will celebrate 20 years since the release of Mansun’s debut, chart topping album, ‘Attack Of The Grey Lantern’, and will be held at Studio 2, Parr Street, Liverpool, where the album was recorded.

Full details of the schedule are as follows:

7pm: Charity Auction – raising money for UNICEF
A chance for attendees to own various Mansun rarities, including the star item, Paul Draper’s silver ‘Attack of the Grey Lantern’ disc!

7.30pm: ‘Recording Attack of the Grey Lantern’
John Robb sits down with mixing engineer Ronnie Stone to discuss the making of the album.

A live set from the Mansun tribute band that formed for the last convention and have been gigging ever since!

11pm-late: DJ’s Bik and Ben
Playing us out until the early hours, with some indie floor fillers and rarities from the Mansun archive!