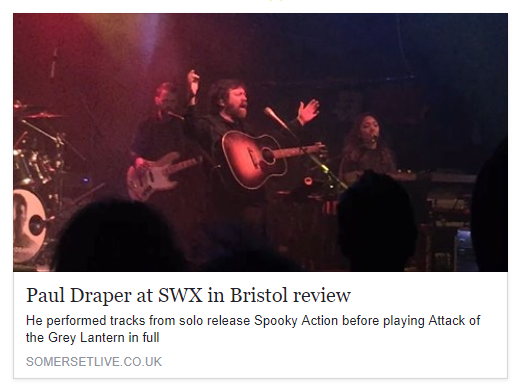 Webzine ‘Somerset Live’ have given the Bristol gig on ‘The Attack Of The Grey Lantern’ tour a full 5 out of 5 stars, writing:

‘The main draw of the show comes after Draper has played tracks from his latest solo release, Spooky Action , and B-sides from its preceding EPs.  But they’re no awkward time-fillers. The melodic hooks matched with melodramatic vocals that made Grey Lantern essential listening are all still present, most obviously with Things People Want , while Friends Make the Worst Enemies, Who’s Wearing The Trousers and Grey House all continue to showcase an under-appreciated songwriter who can produce idiosyncratic but excellent pop songs.

Reliving Grey Lantern was an emotional experience for many members of the sell-out crowd at SWX, comprised largely of those who bought the album when it was originally released.  A man near me was visibly weeping during the na-na-nas of Dark Mavis, and there was a sort of nostalgic catharsis for any of those who had the record on repeat all those years ago. Wide Open Space, Taxloss, Stripper Vicar and Mansun’s Only Love Song stand out but this really was an album with no filler.

After an encore featuring hidden track An Open Letter to the Lyrical Trainspotter, Draper – backed by his incredibly tight live band – stood arms outstretched, promising to be back next year to play Six in full, Mansun’s slightly harder to access but still impressive second album.

Sign on the line, and we’ll give you our money.’

For ticket availability on the rest of the tour, check HERE .