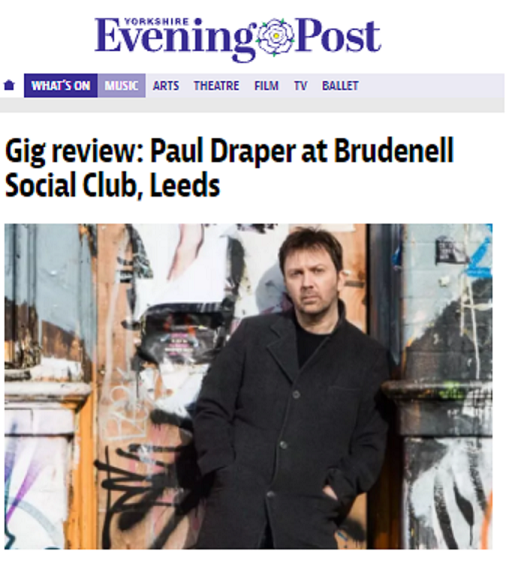 The Yorkshire Evening Post has reviewed the opening night of former Mansun frontman Paul Draper’s first ever solo tour at Brudenell Social Club in Leeds on Thursday 14th September.  Highlighting the great reception to the set, the article reports

“That message of thanks was drawn across the faces of the crowd as Draper played some often deep cut B-sides, recent album cuts and fan favourites thought the set. Performing with a four piece band with Draper firmly and confidently at the forefront, tracks such of the like from his debut including Grey House, Who’s Wearing The Trousers and Don’t Poke The Bear, were met positively with interlaced Mansun back catalogue hits I Can Only Disappoint You and Wide Open Space.”

“The Brudenell is the perfect venue for these intimate fan shows, allowing fans to be toe to toe with their idol. One can only hope Draper returns again. For all those who missed this show, you don’t want to pass the opportunity up again. You’ll only disappoint yourself.”

You can read the full article HERE .